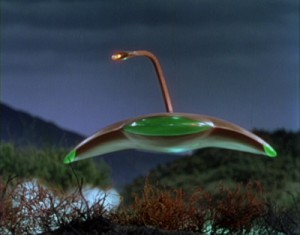 H G Wells was one of the founders of science fiction novel and created great source material for filmmakers. It is surprising that novel of 1898, The War of the Worlds took so long to make it to the screen. Wells’ tale of the Martin invasion of Earth, a warning of perils beyond our imagination, was adapted for radio by the young Orson Welles in 1938, becoming an over night sensation, no doubt getting Hollywood producers excited by its potential. But it was not until 1953 that it made it into cinemas. Byron Haskin’s production features wonderful special effects that, pound for pound have not been excelled. The images of Martian craft floating over the earth, destroying all in their path, remain startling and monstrous for their cold clinical destruction. While Martians now seem fanciful, Well’s final coup presents us with a real enemy that we ignore at our peril.